Consumer sentiment on personal data protection in Canada: A study

Concerns surrounding personal data usage and tracking are on the rise, especially as governments and technology companies aim to monitor the COVID-19 pandemic. To learn more about consumer perceptions of data protection in Canada, Capterra launched a study of 756 Canadians. 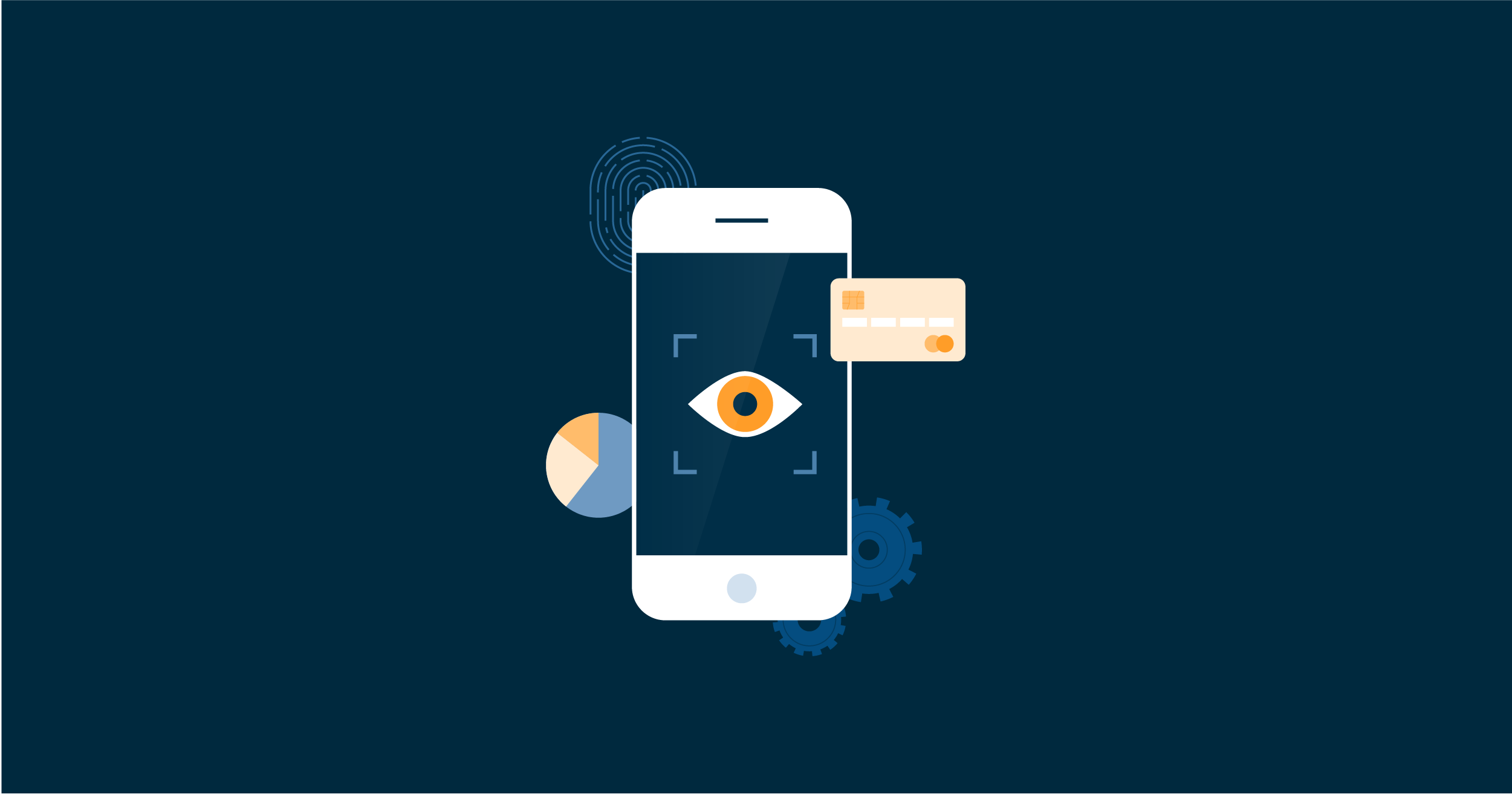 What we will cover

With the arrival of the COVID-19 pandemic, local governments and technology companies alike created new solutions to help monitor the progression of the virus by tracking individuals symptoms and locations, such as the COVID Alert app. The pandemic also accelerated the incorporation of other digital processes, at times relying on multi-factor authentication methods like biometrics to protect sensitive data from falling into the wrong hands.

To understand how multi-factor authentication methods have been implemented as well as how willing Canadians are to use them, we surveyed over 756 consumers in Canada who have carried out at least one digital activity in the last year (for a full methodology, scroll to the bottom of this article). In the first article of this two-part series, we focus on the insights surrounding the use of biometric technology.

What is biometric identification?

In the same way that individuals can be identified by their physical appearance, biometric technology enables people to be identified based on certain physical or behavioral characteristics. 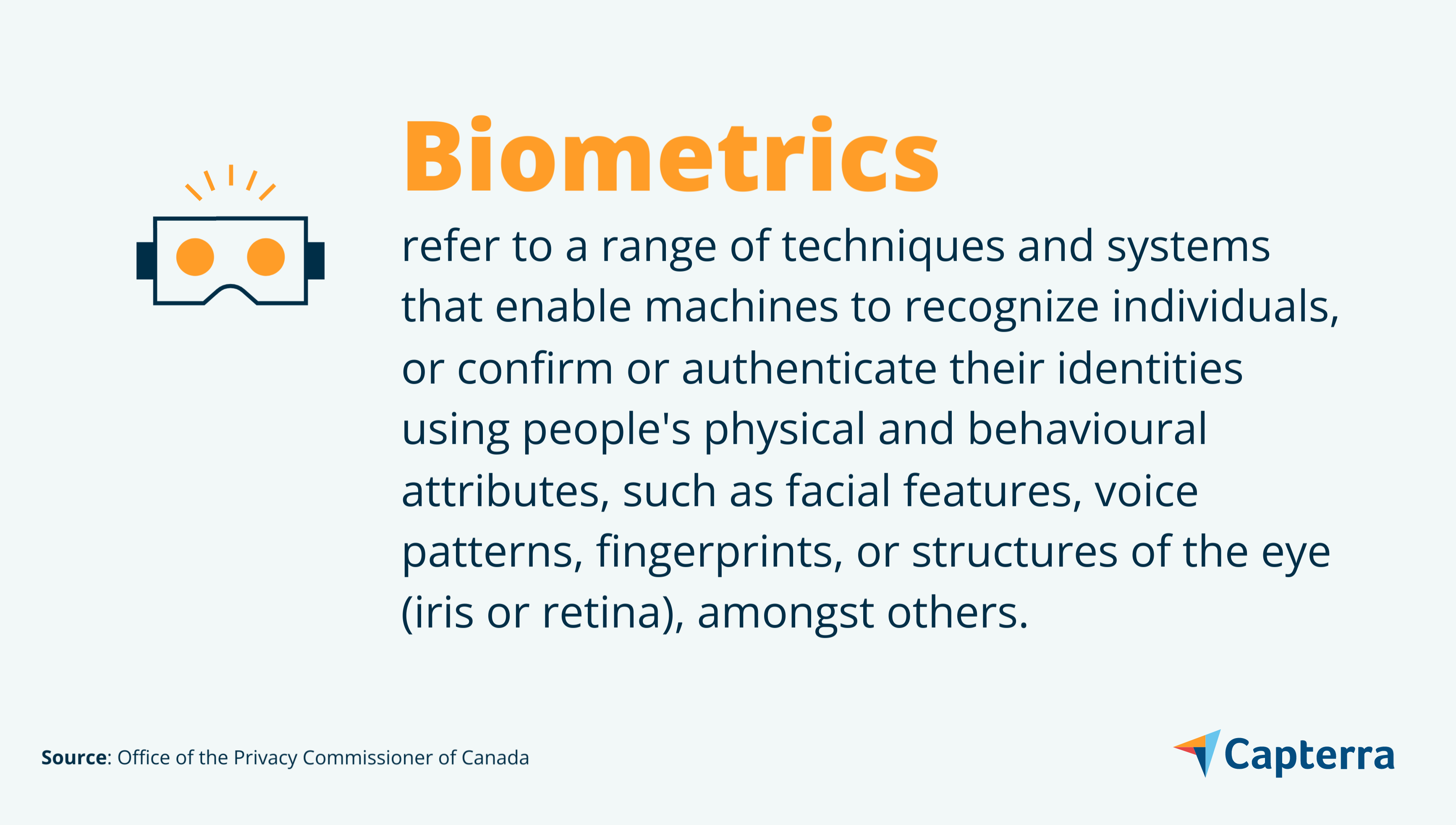 Biometric authentication can be used to protect data and prevent fraud and other cybercrime by requiring users to validate their identity using personal characteristics. Biometric data, such as facial appearance or retina scans, is highly distinctive and difficult (if not impossible) to forge.

Due to the personal and relatively unchangeable nature of biometric data, this authentication method has typically been used by government agencies for things like passport control and permit issuance. Nowadays, the private sector has also begun implementing this technology, one example being smartphone fingerprint scans being used to unlock a phone.

Did you know? Biometric authentication is just one way to verify the identity of a person. Authentication methods can be password-based, single sign-on, and certificate-based, to name a few, all of which provide varying levels of security to SMEs. Multi-factor authentication methods require two or more credentials from the user to verify their identity, strengthening overall security because hackers would have to hack multiple sets of credentials for access.

Of the Canadian consumers surveyed, over half (55%) are regularly using their fingerprints as an identification method. Nearly a third (32%) also use facial recognition methods on a regular basis. Considering that these two methods are becoming a predominant feature of smartphones, it makes sense that they are the most commonly used biometrics. Technology companies have also given biometric-reading capabilities to other devices as well, such as Windows Hello’s facial recognition across Windows computers, tablets, and other devices.

Following these methods, almost a third (31%) indicated that they do not use any of the biometric identifiers mentioned in our survey. 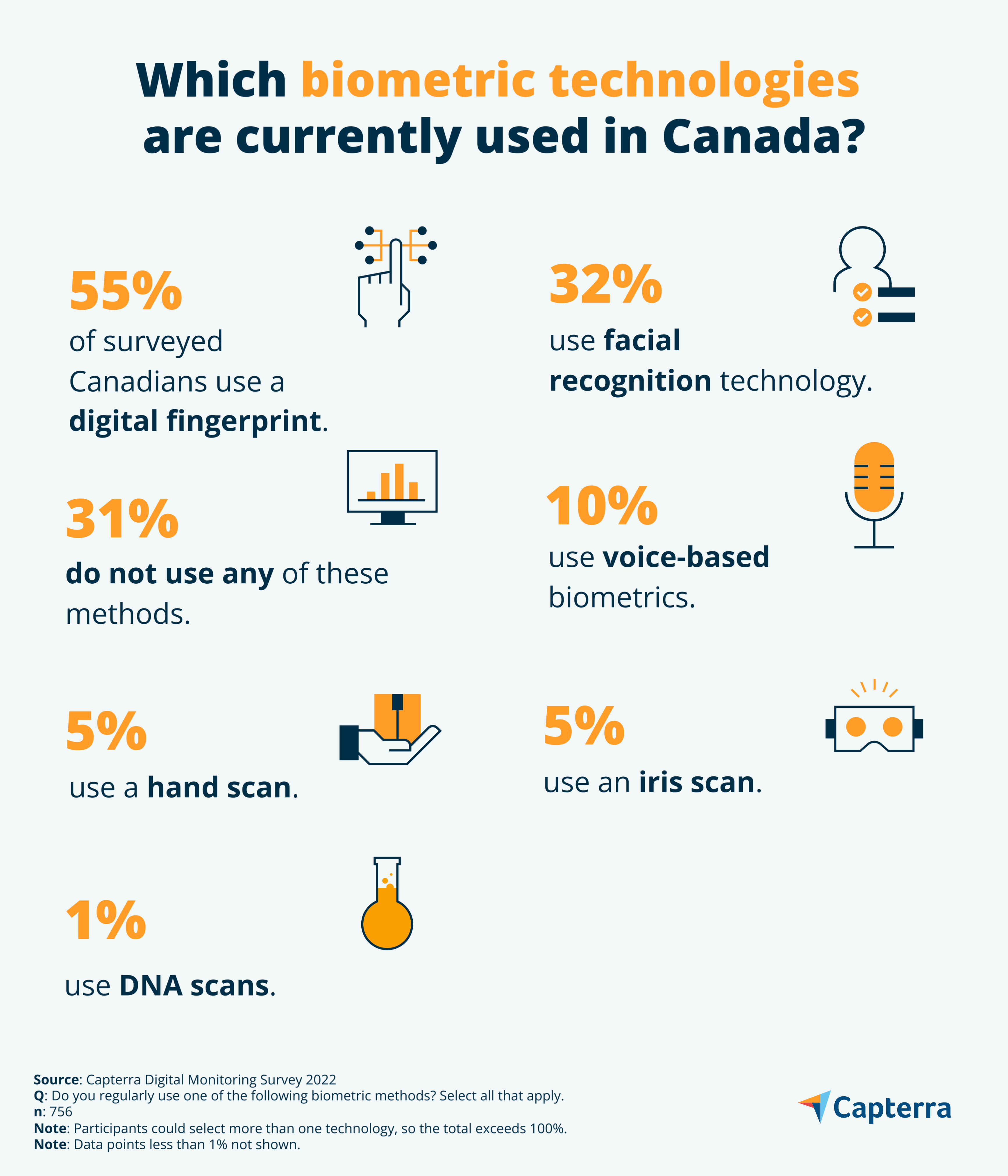 When pondering why other biometric identifiers are less commonly used than facial and fingerprint recognition, the devices that Canadians are using with biometrics could give clues. Smartphones are the main devices used by the biometric users surveyed, with 55% using them on iOS devices and 47% on Android. Computers and tablets were also used to collect biometric data, though only by 18% of biometric users on Windows computers and 16% on iOS tablets.

There are many reasons people might use biometrics. This authentication method can provide a higher level of security in case devices are stolen; it may give consumers more peace of mind when it comes to high risk digital activities such as logging into a bank account or accessing private information. Some of the most commonly selected reasons for their use by the biometrics users we surveyed included:

Has the pandemic affected the use of biometrics?

Interestingly, the COVID-19 pandemic had an effect on biometric users’ usage of the technology. When asked about the time frame in which they began using biometrics, 14% biometric users said they started using facial recognition after the pandemic started. The same can be said for the uptake of the fingerprint scan, with 14% also reporting beginning to use this method since the pandemic started. With the increase in time Canadians spent using mobile apps in 2022, the growing usage of biometric technology could be here to stay.

Despite the increase in biometric use, some Canadians remained distrustful of processes that required personal information to be used online. Case in point: 41% of respondents have never used a digital health passport, and a further 20% have used it before but no longer do. Although the majority of current non-users (made up of previous users and those who have never used the app) say it was due to a lack of usefulness, 14% said they did not want to use apps to access their vaccination status due to concerns about how their data would be protected. 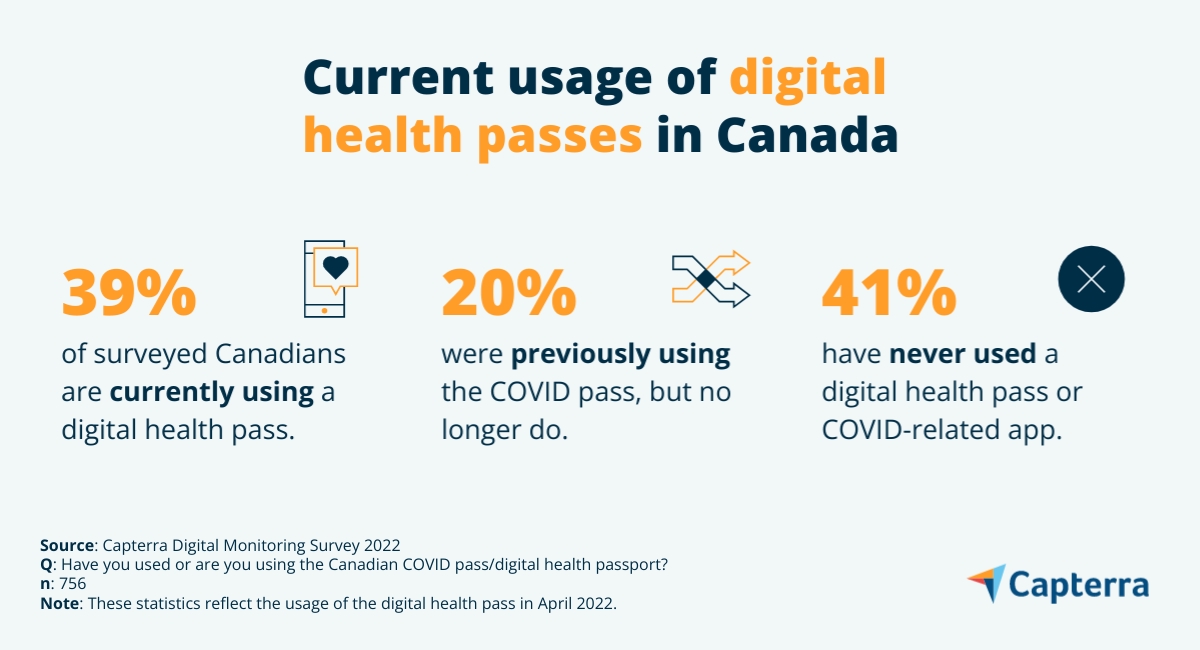 Most Canadians surveyed (43%) feel comfortable sharing personal information with private companies such as their name, date of birth, and address. 40% also said they felt comfortable sharing more sensitive data such as genetic or health-related information. However, comfort levels drop significantly when asked about sharing document images and biometric data with private companies, with only 22% of consumers feeling comfortable in these scenarios. 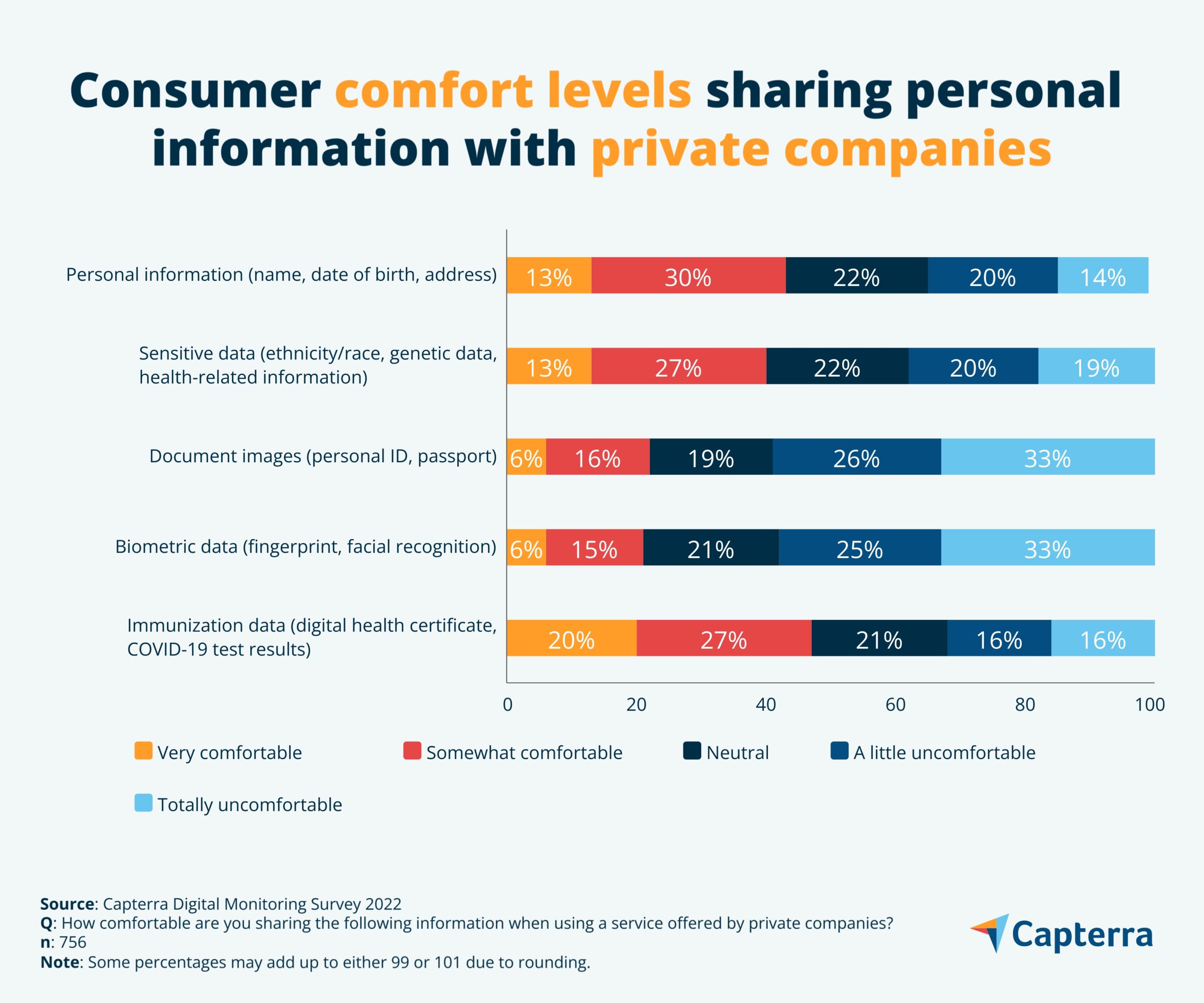 Although many people are comfortable with the idea of sharing data, most respondents (60%) said they would only agree to share personal data under certain circumstances. The conditions, cited by this group, which were important for agreeing to share data were the following:

Outside of the conditional data-sharers, 21% of those surveyed would not agree to share personal data with private or public institutions under any circumstances. Only 11% would agree to share their data unconditionally.

What are the concerns about data protection in Canada?

In light of the misuse of biometric data by Clearview AI (in which facial recognition scans were scraped without consent to aid police investigations), Canadians may be wary of the way their personal data is used online.

These concerns may be unique to Canada and are likely related to the Clearview AI case, as both unconsented use and lack of privacy of biometric data were present. For other countries such as France and Brazil, where the same survey was conducted, data breaches are the main concern regarding biometric technology; this was only the fourth most-cited concern (44%) by Canadian survey takers.

For organizations curious about trying biometric authentication methods, there are some important aspects to consider. Ensuring compliance with both provincial and federal privacy laws is of utmost importance, which is why the Office of the Privacy Commissioner of Canada has provided a biometrics data privacy guide.

In addition to official guidance, remember to take consumers’ preferences for sharing biometric data into account. As a reminder, their top conditions were:

In the next article in this series, we will analyze the use of biometric technologies and monitoring software in the workplace to learn more about their impact on trust, motivation, and productivity.

Looking for multi-factor authentication software? Check out our catalogue.

To gather the data for this report, we conducted a two-part online survey of 756 consumers in February 2022. The selection criteria for the participants are as follows:

Capterra’s Digital Monitoring Survey was launched online in April 2022. The two-part survey was completed by 756 consumers and 752 employees. For the purpose of this article, we have focused on the consumer group. The sample of participants is representative of the population of Canada regarding aspects of age and gender, and the criteria for selecting participants are as follows:

For the data points provided by the French and Brazilian versions of this survey, 716 French and 725 Brazilian consumers were surveyed and subject to the same country-specific criteria.

This article may refer to products, programs or services that are not available in your country, or that may be restricted under the laws or regulations of your country. We suggest that you consult the software provider directly for information regarding product availability and compliance with local laws.

Tessa is a Content Analyst for Capterra, delivering software-related insights to local SMEs. She was featured in the Globe and Mail, La Presse, the Financial Post, and Yahoo.

Tessa is a Content Analyst for Capterra, delivering software-related insights to local SMEs. She was featured in the Globe and Mail, La Presse, the Financial Post, and Yahoo.

Why Capterra is free

Capterra is free for users because vendors pay us when they receive web traffic and sales opportunities. Capterra directories list all vendors—not just those that pay us—so that you can make the best-informed purchase decision possible.