Studies show that diverse and inclusive workplaces are more successful and more innovative. According to research by McKinsey & Company, companies with highly diverse executive teams were 27% more likely to outperform others in the same country and industry. And a study into more than 4,000 research and development teams in Spain found that companies with more women were more likely to introduce radical innovations onto the market. 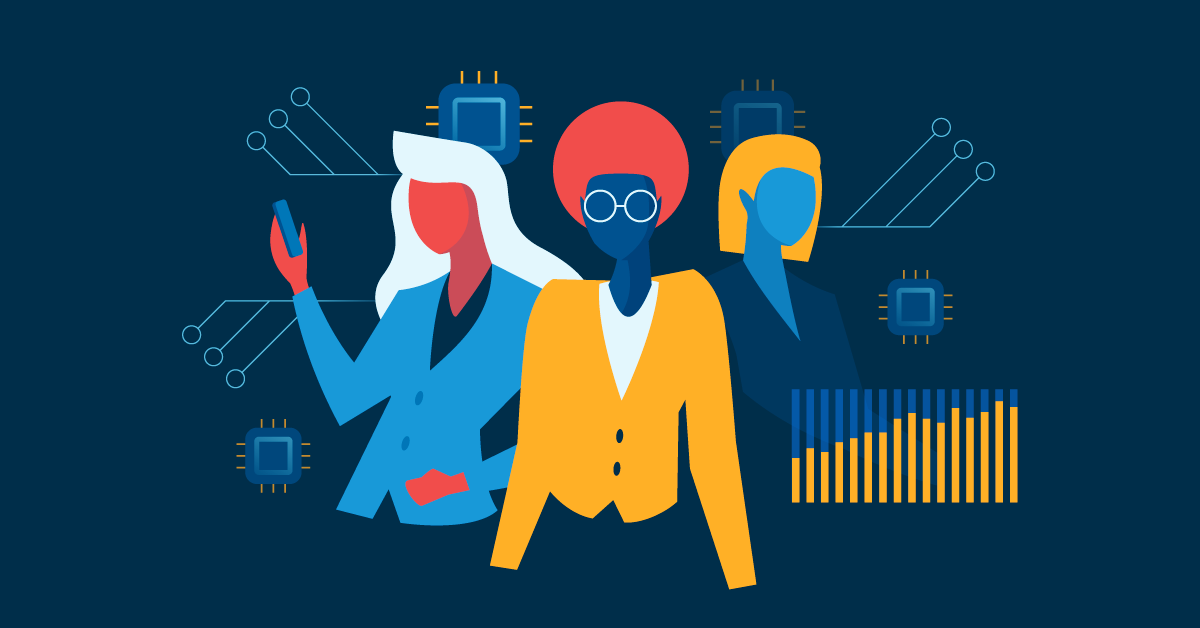 However, women are still underrepresented in technology —especially at the top level of business. The National Center for Women in Information Technology says that despite making up 57% of the workforce overall, women only hold 25% of jobs in IT and 18% of CIO positions in the top 1,000 companies in the US by revenue.

To find out more about this topic, we asked 9 of Canada’s women in tech about their experiences breaking into, working in, and leading companies in this exciting industry. We wanted to learn about the changes they have seen since they started their career journey and understand how young women can prepare for careers in this industry.

Did you know? Many HR professionals use HR software to help their diversity, equity, and inclusion programs. While they are no replacement for careful and considered management, digital tools can help companies build more diverse workforces, identify and address bias, and educate staff about important issues. For example, software can remove some of the information from applications that might subconsciously influence recruiters in their hiring decisions. Or it can help workplaces analyse their hiring practices to assess workplace diversity. Take a look at some of the recruitment software, talent management software, and training software reviewed and rated by thousands of other business users in Canada.

The route to a tech career

Careers in technology are often —but not always— preceded by studies in science, technology, engineering, and mathematics (STEM) subjects. Women tend to be underrepresented in these subjects —accounting for 44% of students under 19 years old in undergraduate degree programs in 2010, according to a longitudinal study by Statistics Canada. Over five years, the proportion of women studying STEM remained similar, but reasons for not persisting with STEM education are illustrative. The study says:

‘One of the most common reasons for women not to persist in STEM postsecondary studies is loss of interest in the STEM curriculum, which some studies found is related to women not self-identifying as scientists, feeling isolated or out of place in STEM classes (due to being greatly outnumbered by male peers, or to unequal treatment by professors and/or peers).’

Some of the women we spoke to said that these attitudes persist well beyond education.

We began, however, by asking how our interviewees first became interested in technology. Their responses were varied, reflecting their different roles within the industry. Some, like Shelley Ma, Incident Response Lead at Coalition, Inc, started out of curiosity. She began digging under the hood of her favourite online games as a teenager to try and earn more credits: “That’s when I started to get creative and thought, ‘Well, is there another way I could earn these credits? I wonder what would happen if I tweaked this code right here?’” she says.

Shelley shares more about her education in STEM and her introduction to the Canadian tech scene in her full interview below.

Curiosity and creativity also sparked a love for tech in Sage Franch, CEO of Crescendo DEI, who says, “In my teen years I discovered software development through the arts —first through 3D animation, and then later through app development. It was the creativity that excited me, the ability to create something from nothing and solve big problems from anywhere in the world.”

Read more about Sage’s career and how she began helping women rise above the same challenges she faced as a woman in tech.

Obstacles for women in tech in Canada

According to a STEM study funded by the Canadian government, there are four primary blockers that women experience during their STEM careers:

Many of the women we spoke to confirmed that they had encountered obstacles like these. From 7Shifts, Digital Marketing Specialist Alex Fainblum and Junior Performance Marketer Brooklyn Boehm both said that they had seen negative comments from people outside the industry. Alex says, “Externally … I had many peers question my interest and capabilities in the industry, given how male-dominated it was.”

“Many outsiders do not understand the mental labour that tech jobs require,” adds Brooklyn. “By many outsiders, my unique digital skills and knowledge are not recognized in the ‘real world’ because of my gender.”

Advice for a successful career in tech

We asked interviewees what advice they would give to young women starting out in a career in technology. Rather than recommending particular courses to study or experience to gain, many instead gave advice about mindset.

Enina Bicaku, a Content Marketing Specialist at Looka said, “If you want a promotion, a raise, or more vacation time, you have to ask consistently and document all of your hard work and results to get what you need. Know your value, and don’t settle for anything less than what you think you deserve.”

At the same time, many of the women we interviewed emphasised the need to find your voice, and to identify mentors —male or female— who can help you progress your career. Tricia Kelly, Director of Channel Sales at SnapLogic says, “Don’t pretend to know everything and don’t be afraid to ask questions. People will respect you more knowing that you have the confidence to look for the right answers. It’s also important to be sure you have a voice at the table —don’t hesitate to raise that hand and contribute to the conversation.”

The future looks bright for Canada’s women in tech

Canada proactively supports the inclusion of more female talent in its tech industry. The WE-CAN initiative, for example, which is funded by the Women Entrepreneurship Strategy (WES) Ecosystem Fund, aims to support women in expanding and launching their businesses. The women we spoke to agreed that the direction of travel in this area is largely positive, even if there is still a long way to go.

Lindsey Goodchild, Co-Founder and CEO of Nudge, says that Canada measures up well compared to other nations and offers an example of its vibrant startup and venture capital (VC) culture. “W​e have the largest female focused VC fund in the world.” she says. “The BDC Women in Tech fund is over $300M and helps jumpstart big infusions of capital into women-led companies.”

As an entrepreneur, Lindsey has been through unique challenges as a woman in the startup tech industry. Read about her experience and get her advice in the full interview.

The bustling startup scenes in Toronto, Vancouver, and Montreal, among others, attract some of the best and brightest talent globally, such as former sports executive Erin Crowe, who now serves as ​​Chief Financial Officer at Martello Technologies. She says, “Ottawa has a strong technology sector, and it wasn’t an area that I had worked in before. I am always looking to learn about new areas and industries, so it was great to have an opportunity to work in a new space in a sector that is so important in our city.”

Carly Lockwood, Product Manager at Launchtrip, is encouraged by the female leadership within her own company. She says, “Our management ratio illustrates how diverse we are. 71% are females, 33% of our board members are female, and we will continue to evolve that number.” Carly also explains that, “On a leadership scale, having more female presence impacts the workforce by increasing retention and engagement among female professionals, and it trickles down from there.”

Seeking to fill leadership roles with female employees isn’t the only way to promote an inclusive workplace. Read more on how Carly seeks to make a difference for women at her company.

Although some barriers to women’s education and employment in tech may still be in place, Canada is making strides towards gender equality. As the nation passes pay transparency legislation, female professionals in the industry are contributing to the movement by supporting —and employing— their fellow female colleagues. As empowered women seek to empower more women with Canada’s equal opportunity initiatives, inclusivity in the world of tech is improving day by day.

What’s next? Check our HR software catalogue to find the tool that suits you best.

This article may refer to products, programs or services that are not available in your country, or that may be restricted under the laws or regulations of your country. We suggest that you consult the software provider directly for information regarding product availability and compliance with local laws.

Content Analyst at Capterra, dedicated to helping SMBs access the insights that elevate their organizations. B.A. in English, University of Michigan. Based in Barcelona.

Content Analyst at Capterra, dedicated to helping SMBs access the insights that elevate their organizations. B.A. in English, University of Michigan. Based in Barcelona.